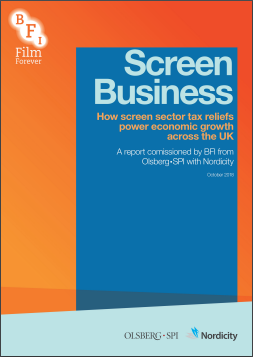 Published in October 2018, ‘Screen Business: How tax incentives help power economic growth across the UK’, produced by Olsberg SPI and Nordicity and commissioned by the British Film Institute, investigates the contribution to the economy of the UK screen sector tax reliefs, including the VGTR. It also includes an analysis of the total economic impact of the UK games industry, including detailed assessments of the development, publishing, retail, esports and merchandising subsectors.

At the time of publication, 'Screen Business' represents the most comprehensive and up-to-date economic analysis of the UK games industry. Due to the amount of time required for various tax data and other essential components to become publicly available, the report is based on 2016 data, which was the most recent complete annual dataset at the time. The reports methodology underwent review from several Governemnt departments, including HM Treasury and DCMS, and contained a foreword from Phillip Hammond, Chancellor of the Exchequer.

The report's methodology is complex and outlined in detail within the report. In summary, the games industry analysis is based on data derived from the UK Games Map, filtered for only those companies active in 2016. Other key elements of the data inlude Ukie's 2016 UK Consumer Market Valuation and GfK UK Chart-Track sales data for 2016.

Each economic measure within the report is broken down into the following standard sub-measures:

The data shows that in 2016, the UK games industry directly employed 20,430 people and contributed £1.52bn in GVA to the UK economy. With indirect economic and spillover impacts included, these numbers rise to show the industry supporting 47,620 jobs and contributing a total of £2.87bn in GVA.

The report shows that with £1.25bn spent on game development in the UK, employment in the sector is at record levels, with 16,140 FTEs directly employed in development and publishing roles, contributing over £1.35bn in GVA. The strength of UK games companies was also demonstrated in the significant inward investment to the industry, with at least £1.75bn of overseas investment throughout 2015-2017.

The success of VGTR games directly contributed £294.1m in GVA to the UK economy, rising to £525m including indirect and spillover impacts. The report also shows that without VGTR support, 68 per cent of VGTR-supported games would not have been made in the UK. With £156.0m generated in tax revenue from VGTR-supported games, this means that every £1 invested into the games industry via VGTR generated an additional £4.00 in GVA for the UK economy. Of all the screen sector tax reliefs, VGTR delivered the highest rate of labour productivity in 2016 at £83,800 (compared to the UK average of £62,100).