All figures shown below are those given on the date of publication. Later valuations may have revised the figures for this year.

While 2020 was a difficult year for many, with impacts of the COVID-19 pandemic affecting nearly every aspect of daily life, homebound consumers turned to games for entertainment and as a way to virtually connect with friends and families.

Ukie’s annual games market valuation, launched at the start of the 2021 London Games Festival, shows software revenue grew +18.% to £4.55bn, with increases across both digital and physical sales. Game hardware saw a record year, with consumers kitting themselves up with new consoles, accessories and upgraded PC game components, driving hardware revenues up +60.8% year on year to reach £2.26bn.

The game culture section of the valuation, measuring revenue from wider game-related revenues, saw a more mixed picture. While overall game culture revenues grew to £199m thanks to sizeable increases in sales in areas such as toys and merchandising, for game-related events, COVID-19 impacts led to serious challenges. 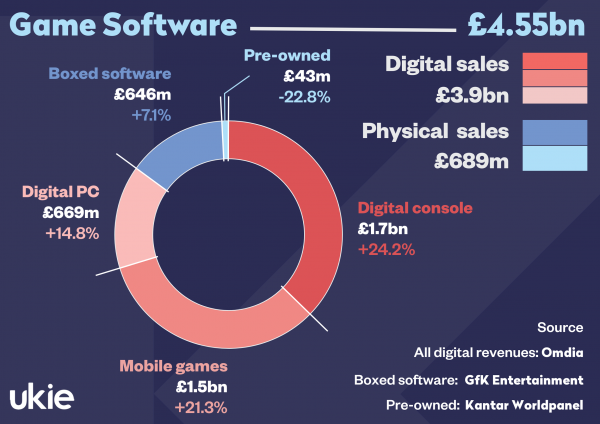 Data from GfK Entertainment showed that sales of new boxed software increased +7.1% year-on-year to £646m, despite limited access to the high street.

Senior Client Director at Gfk, Dorian Bloch, explains: “The 2020 big winner by format was Nintendo Switch. During the initial Covid lockdown period, we saw massive growth from Switch software sales, up 215% over the equivalent 13 weeks of 2019. Xbox One and PS4 also enjoyed uplifts and of course, at the tail end of 2020 we saw the introduction of PS5 and Xbox Series consoles, whose effect will be significant for 2021 and beyond.”

For pre-owned games, high street closures had more of an impact on revenues, declining –22.8% to £42.6m, according to data from Kantar Worldpanel.

As with many other areas of entertainment, online and downloadable content provided a lifeline for UK players in 2020. Overall, digital software sales – combined across PC, console and mobile – grew +21.4% to a record £3.9bn, with digital revenues now comprising 85% of the total software market, data from Omdia showed.

For the first time in 2020, Ukie's market valuation provides a breakdown of digital software revenues across digital PC, console and mobile devices, thanks to Omdia's market insight. With the largest share of digital sales, digital console revenues increased +24.2% to £1.7bn in 2020, exceeding digital PC revenues by more than double, despite growth of +14.8% in digital PC software to £669m. The smallest screen also proved a welcome distraction, with mobile revenues up +21.3% to £1.5bn.

Overall digital distribution channels and online games proved to be well-positioned to provide relief and enjoyment for people during the pandemic, according to [1] Principal Analyst for Games, Steven Bailey:

“The ways in which PC and console gaming evolved across the past decade have made them adaptable to the exceptional conditions of the past year. Experiences driven so heavily by connectivity allow us to remain social, as we deal with the difficulties of lockdown.”, he explains, “The versatile nature of digital consumption gave us a number of ways to keep buying and playing games – whether via content-library subscriptions, intensive discounts, or even freebies given away to help people through such a challenging period.” 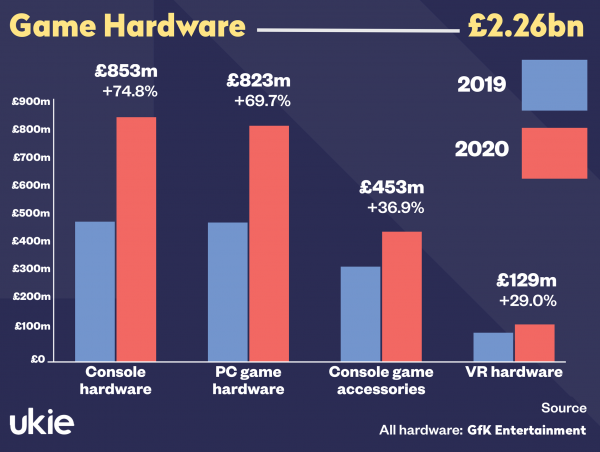 As lifestyles adjusted to new circumstances, many people invested in new and upgraded game hardware in 2020, leading to a £2.26bn record year for sales, up +60.8% across all categories according to data supplied by GfK Entertainment.

Game consoles saw a huge increase in sales, increasing +74.8% to £853m. Again, GfK’s Dorian Bloch puts this down to the success of the Nintendo Switch: “Switch hardware revenues grew almost 300% in the initial Covid lockdown period, compared to the equivalent weeks of 2019, accounting for slightly more than 20% of 2020 Switch sales. Xbox One and PS4 also saw notably increased sales across the year and the launch of the next-gen PS5 and Xbox Series had a marked effect on the huge jump in overall hardware revenues.”

PC game hardware, from laptops and graphics cards, to “gaming” mice and controllers, saw a similar major uplift in 2020, increasing +69.7% to £823m. Relatedly, console game accessories such as controllers and headsets saw sizable increases due to related console hardware sales, up +36.9% to £453m.

“Driven by home office working or simply from being locked at home and a perceived need for greater entertainment options, many people who previously had no need to equip themselves for extended working from home opted to purchase gaming variants instead of more traditional standard items”, explains GfK’s Bloch, “We also saw another peak in console game accessories during Q4, thanks to the arrival of PS5 and Xbox Series – new console generations always result in a certain amount of upgrades to existing gaming devices.”

VR hardware sales also saw a resurgence in 2020, with the launch of the new “standalone” Oculus Quest 2 headset helping drive a +29.0% increase in VR revenues to £129m.

Generating a combined £199m in 2020, the wider world of game-related products and entertainment saw both positive and negative impacts from the pandemic across different categories.

Included for the first time in 2020, streaming and game video content saw consumers spending £45.6m supporting streamers and other content creators, according to analysis conducted by Ukie.

Game-related toys and merchandising saw revenues increase +22.4% to £119.6m according to data from NPD, thanks to both regular franchise favourites such as Pokémon and Fortnite, as well as the hugely successful launch of LEGO Super Mario.

The lack of high street retail and travel impacted book and magazines sales, according to data from Nielsen Book, ABC and Ukie. Overall revenues dropped -24.5% to £10.5m, although major franchises continued to play an important role in books.

Despite a strong box office performance for the widely popular Sonic the Hedgehog movie in February and a continuing positive trend in-game music revenues, with only one game-related film released in 2020, overall movies and soundtrack revenues declined -22.2% to £22.9m, according to data from BFI, OCC and Ukie.

Perhaps unsurprisingly, game-related events and venues were the worst hit by COVID-19, suffering a -97.2% drop in revenues to just £249k in 2020, down from £8.8m in 2019, analysis from Ukie showed. While the impacts on operators in this space have been severe, several major events are already scheduled to return in 2021, while areas such as esports have relied upon digital-only routes.

The 2020 UK games market consumer spend valuation details in full are as follows. 2019 figures are revised as of 2020.